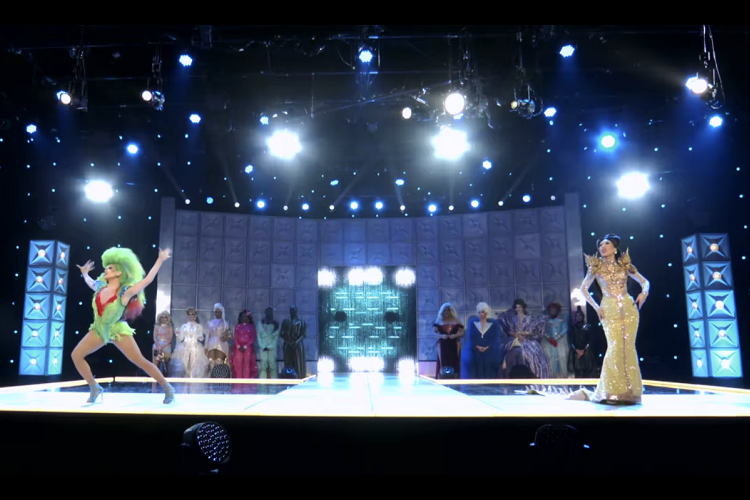 Racers, start your engines: the Department of Film Studies is thrilled to welcome you all to our final event in our Departmental Speaker Series.

Dr Julie Lobalzo Wright (University of Warwick) will be sharing her fantastic new work on RuPaul’s Drag Race and its connection to the classic Hollywood musical. Everyone is welcome – from scholars working with questions of performance to casual Drag Race fans.

Use the link below or email Dr Zoë Shacklock on zrs@st-andrews.ac.uk for assistance with accessing the event.

One of the most exportable parts of RuPaul’s Drag Race is the ‘Lip Sync for Your Life’ segment. The popularity of these segments, as articulated in this talk, derives from its implicit and explicit connections to the classic Hollywood musical. Through the camp value of performance, the celebration of the popular song, and the dual focus structure and registers, Lip Sync for Your Life is indebted to genre paradigms, while at the same time transforming them through the complex interplay of drag performance, reality television and lip synching.

This talk emerges from Dr Lobalzo Wright’s forthcoming chapter in Musicals at the Margins: Genre, Boundaries, Canons (Bloomsbury, 2021) and will include many examples from RuPaul’s Drag Race.

Dr Lobalzo Wright is a Teaching Fellow in Film and Television Studies at the University of Warwick. Her main research interests are in film and television stardom, musicals, masculinity in film, Hollywood/American cinema, British cinema and television, popular music and cinema, and animation.

She is the author of Crossover Stardom: Popular Male Music Stars in American Cinema (Bloomsbury, 2017), Lasting Screen Stars: Images that Fade and Personas that Endure (with Lucy Bolton; Palgrave, 2016) and the forthcoming Musicals at the Margins: Genre, Boundaries, Canons (with Martha Shearer; Bloomsbury, 2021).